About The Hip Pocket

Phil Marsh attended the Guitar Institute of Technology after studying music in college.  Phil is band leader of The Hip Pocket and writes most of the arrangements for the band.

James Bates, along with Phil, has been there since the band’s inception.  He has earned his definitive reputation as a male vocalist with the best groups in West Michigan for over 25 years.  He has the natural ability to develop a rapport with audiences everywhere.

Danielle Cosby draws her experience from dance and singing.  Her excitement and enthusiasm drive the group to new levels of performance.  Danielle also performance at many events at the Circle Theater.

Chris has grown up around music and bands. He has played for various groups in the Grand Rapids area. His solid, aggressive playing is always on display.

Paul Lesinski fills out the keyboards with funky organ to lush string parts.  Paul’s exceptional ability has made him one of the most sought after keyboard players in West Michigan.

West Michigan drummer Madison George attends Western Michigan University and is majoring in jazz studies. He has performed with a diverse collection of artists, such as Terell Stafford, Peter Eldridge, Edward Simon, Matt Giraud, Max Colley III, Steve Talaga, and Michigander.  In addition to The Hip Pocket, Madison can be seen performing with jazz/hip-hop/experimental band Lushh or modern jazz quartet REHM Cycle.  He can be reached at: madisongeorgemusic@gmail.com

Hugh brings his experience from playing in the West Michigan for years to the band. Another great soloist.  You can’t find too many players who can nail bari parts like Tower of Power’s Doc Kupka.

While serving in the US Navy, Jim was assigned to numerous bands and performed in all saxophone positions, doubling on flutes and clarinets as required.  At the conclusion of his 28 year military tenure, he was the lead alto player for the US Navy Band Commodores (the Navy’s official jazz big band) in Washington, DC.  Recognized as one of the finest jazz saxophonists around, Jim has appeared nationally and internationally in concert with the Temptations, Rosemarie Clooney, Natalie Cole, and Jazz Cruise appearances with Frank Capp’s Juggernaught Band.  He is featured on numerous recordings, including his own album, “Coronado Sands”.  While residing in South Florida, Jim performed regularly with a number of South Florida’s finest musical organizations, including Peter Graves Orchestras, the Bob Hoose Big Band, and the Palm Beach Pops.  Since moving to Grand Rapids, Michigan, Jim has had the good fortune to perform with the Grand Rapids Jazz Orchestra, and the Gull Lake Jazz Orchestra.

Luke is a graduate of Western Michigan University and teaches music and Comstock Park Middle School.

We flew Yakiv in from the Ukraine. He was born in 1991 in Dnipro (Ukraine), a Graduate of Dnipropetrovsk Music Academy, worked at this Academy as a trumpet and jazz theory teacher. He has performed with several jazz ensembles in Ukraine and Europe having performed with Michael Abene, Randy Brecker, Peter Erskine, George Garzone, Jamie Cullum. Not bad! Winner of Gulf Yamaha Trumpet Scholarship (Dubai) in 2016. In 2016 got the Fulbrught Scholarship, moved to US and now working on the Master’s Degree in Trumpet Jazz Perfomance at WMU.

The band would not be complete without soundman Paul Andre.  He monitors the wireless gear, he keeps the sound thumpin’, and even adds some background vocals on occasion too. 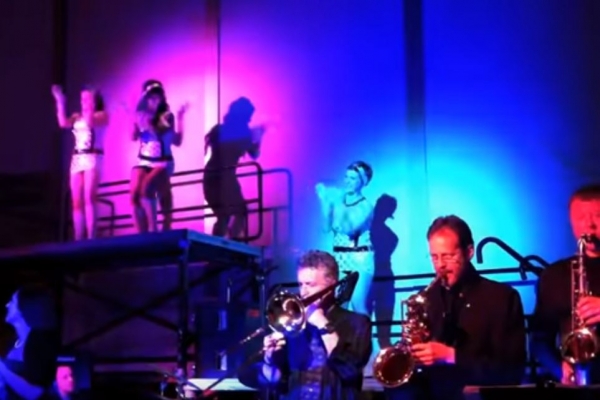